The new app will assist residents in assessing their areas’ vulnerability to disasters. 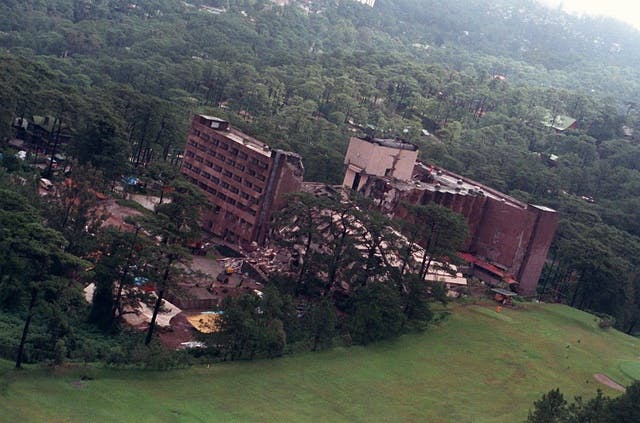 Aerial view of the collapsed Hyatt Terraces Hotel at Camp John Hay, Baguio City. The hotel was damaged by the magnitude 7.8 earthquake that rocked northern and central Luzon on July 16, 1990. Photo from the US National Archives.

On the anniversary of the magnitude 7.8 Luzon Earthquake that rocked northern and central Luzon on July 16, 1990, the Department of Science and Technology (DOST) and the Philippine Institute of Volcanology and Seismology (Phivolcs) launched the first one-stop shop online application for hazard and risk assessment in the country.

DOST Secretary Fortunato dela Peña and Phivolcs director Renato Solidum, who is also undersecretary for Disaster Risk Reduction and Climate Change, led the launch of HazardHunterPH at the Phivolcs Building in Diliman, Quezon City on Tuesday.

HazardHunterPH is the result of collaboration and knowledge sharing among different agencies under the DOST, other national government agencies that work on disaster risk-reduction and management (DRRM) and local government units (LGUs). The online application generates initial hazard assessment reports for seismic, volcanic, and hydro-meteorological (floods, landslides and storm surges) hazards along with explanations and recommendations from mandated government agencies in real time.

“Many agencies have been involved in producing hazard maps and gathering geospatial data that are critical to disaster risk assessment. However, these data are managed independently and not yet integrated, which hampers quick decision making. We have to get data from Phivolcs, PAGASA (Philippine Atmospheric, Geophysical and Astronomical Services Administration), MGB (Mines and Geosciences Bureau) and Namria (National Mapping and Resource Information Authority). Today, we are attempting to have what can be called a one-stop shop. (It) provides a solution to the data silos that we have in government, and for the public to have a quick and easy access to hazard information for better preparedness,” Dela Peña said in a speech during the launch. 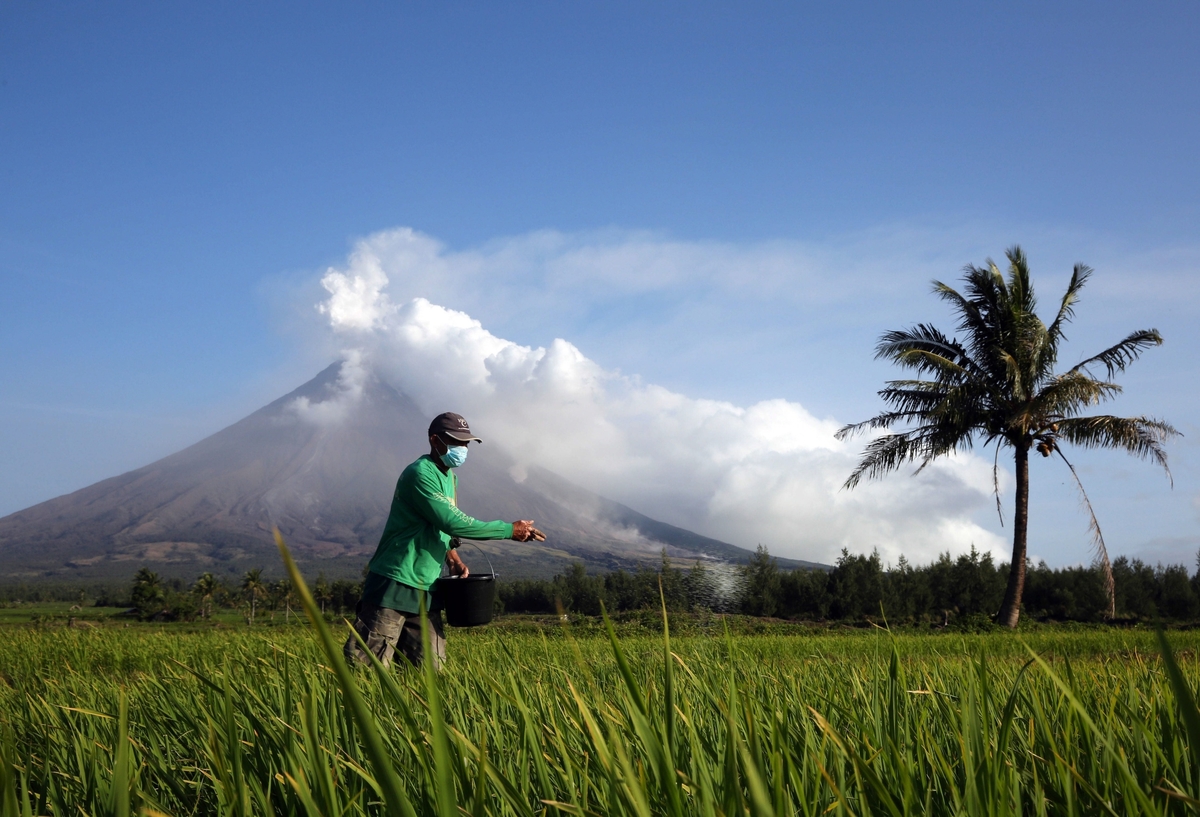 A farmer spreads fertilizer over his rice field while Mayon Volcano spews ash in Daraga, Albay on Wednesday, Feb. 7, 2018. Photo by KJ Rosales, The Philippine STAR

Using HazardHunter PH is quite easy. Currently, the online application can be viewed on desktop and laptop computers, with the mobile application still under development. Once the website loads, users are presented with a satellite map of the Philippines. On the left pane of the website, there is a set of display options for seismic, volcanic and hydro-meteorological hazards that users can check.

Likewise, HazardHunter PH can also display exposure information for public elementary and high schools, health facilities and road networks with data from the databases of the Department of Education, Department of Health and the Department of Public Works and Highways.  By clicking on both the hazard and exposure information, users will see which educational institutions, health facilities and roads are located along or near known seismic, volcanic or hydro-meteorological hazards. 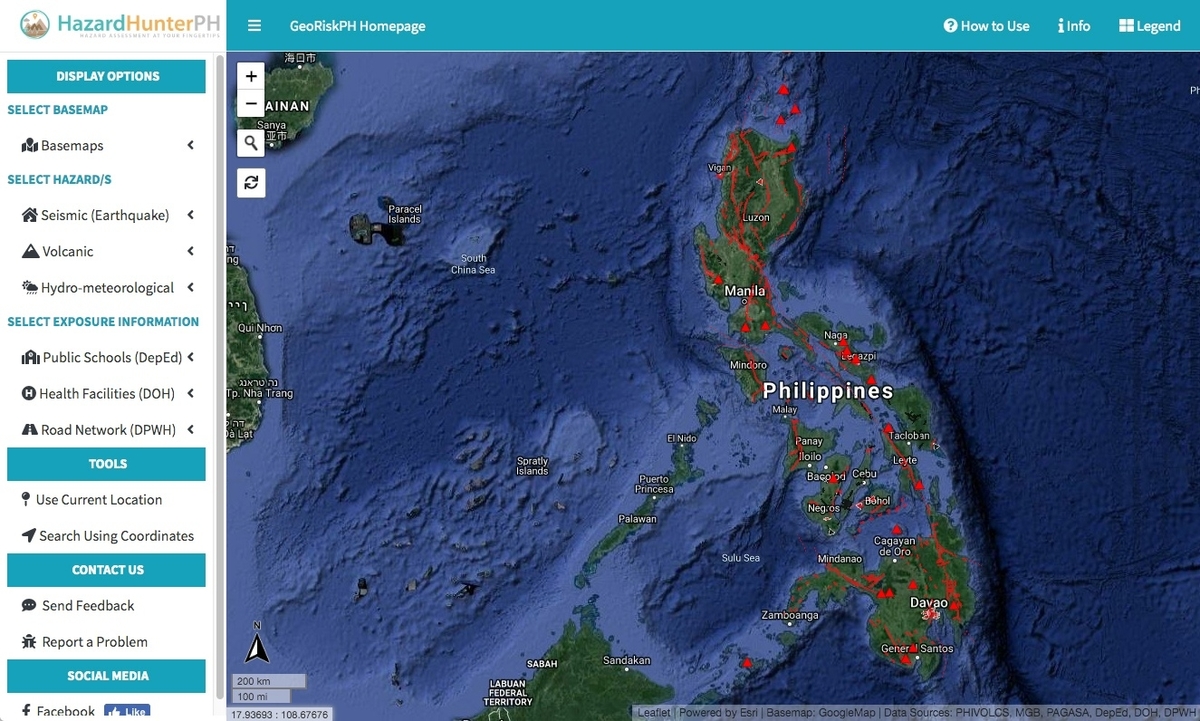 A screenshot of the HazardHunter PH website shows its layout, with the satellite map displaying all the active faults in the Philippines after the “Active Faults” option is selected in the Seismic Hazards section of the display options pane.

HazardHunter PH was developed as part of the DOST’s GeoRiskPH initiative, which includes other online and mobile hazard information tools for geospatial information management, hazard analysis and risk assessment, such as the GeoMapperPH, GeoAnalyticsPH, and Map and Feature Services.

“Where are the hazards that will affect the Philippines? Where are the hazards related to the earthquakes, typhoons, or volcanic eruptions? Those questions are important, but we cannot answer it if the location of all these things that we want to know is not properly set in the most correct position. We cannot maximize this geographic information unless we have the same base map… unless all the maps we produce have the same format and standards. GeoRisk Philippines is a platform that does that — to give you the answer where, to make sure you are better prepared, and to make sure that we have better planning, because we have the correct geography,” Solidum said in his speech during the launch.

Likewise, it follows on the success of Project NOAH (National Operational Assessment of Hazards), which the DOST administered from 2012 to 2017. The online and mobile application, which is now managed by the University of the Philippines-Diliman, displays not only geospatial information on seismic, volcanic and hydro-meteorological hazards in the Philippines but also real-time weather and earthquake updates and information on historical hazards that affected the country.

The online application was launched as the DOST observes the annual National Science and Technology Week from July 17 to 21 and the country observes National Disaster Resilience Month this month.