Stories about them may fade, but the lolas are not losing hope that one day, they will get the justice they deserve. They also say that people should not forget history. 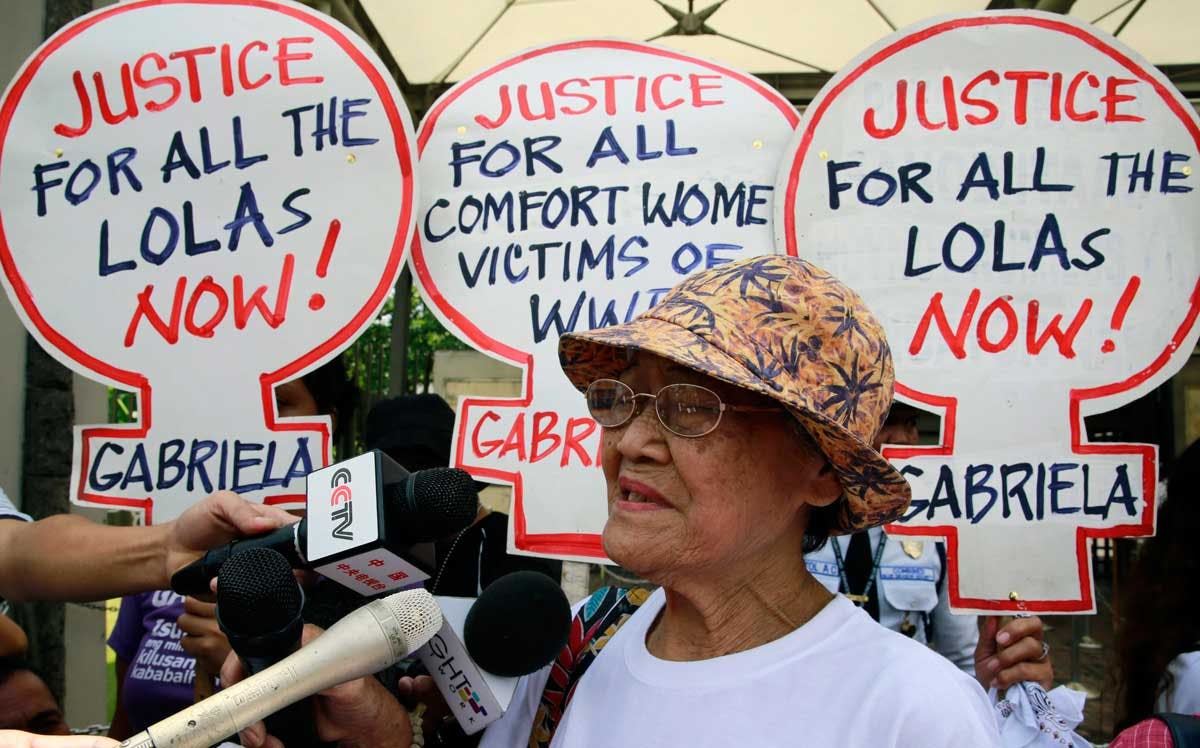 On Aug. 14, 2015, Filipino comfort women stage a demonstration in front of the Japanese embassy in Pasay City to press for an apology and compensation for the atrocities committed against them by Japanese forces during World War II. Photo by Edd Gumban, The Philippine STAR

We hardly hear about them nowadays. But the Filipino “comfort women” continue to press for an apology and compensation from Japan over sexual slavery during World War II.

Braving Wednesday’s heat shortly before noon, 90-year-old Estelita Dy shielded herself from the sun with a pink shawl over her Filipiniana dress, which she wears on special occasions. It was Aug. 14, the International Day to Commemorate Japanese Wartime Sex Slavery, which she believed called for formal wear.

Their protest action on that day draws out memories of their rallies since they came out in public as rape victims in the 1990s. With her fellow grandmothers or lolas, Dy displayed her slogan calling for an end to wars of aggression, which also means an end to another generation of comfort women.

At Mendiola Bridge near Malacañang, Dy called out President Duterte for not looking into their plight.

“We have not received justice and we are all dying,” said Dy, who was raped by Japanese soldiers at a garrison in Talisay, Negros Occidental when she was just 13 years old. “I hope that the President hears this.”

Dy knows that Duterte needs to speak with the Japanese government if he will consider helping them.

When the comfort woman statue of Jonas Roces, which was built along Roxas Boulevard in Manila and unveiled by the National Historical Commission last April was removed in April 2018, the city government of Manila explained that the bronze statue of a veiled and blindfolded woman – displaying the strength of the comfort women – had to give way to a flood control project.

Two months later, women’s groups led by Filipino-Chinese anti-crime activist Teresita Ang See commemorated Independence Day on the place where the statue had been, but there was no flood control project in sight. “Where is that drainage project of theirs?” Ang See asked.

The statue was removed before the 51st Annual Meeting of the Asian Development Bank Board of Governors in Manila in May. Japanese officials had expressed disappointment over the erection of comfort woman statues in the country.

Duterte himself addressed the issue of the statue’s removal, saying, “We can place it somewhere else.” 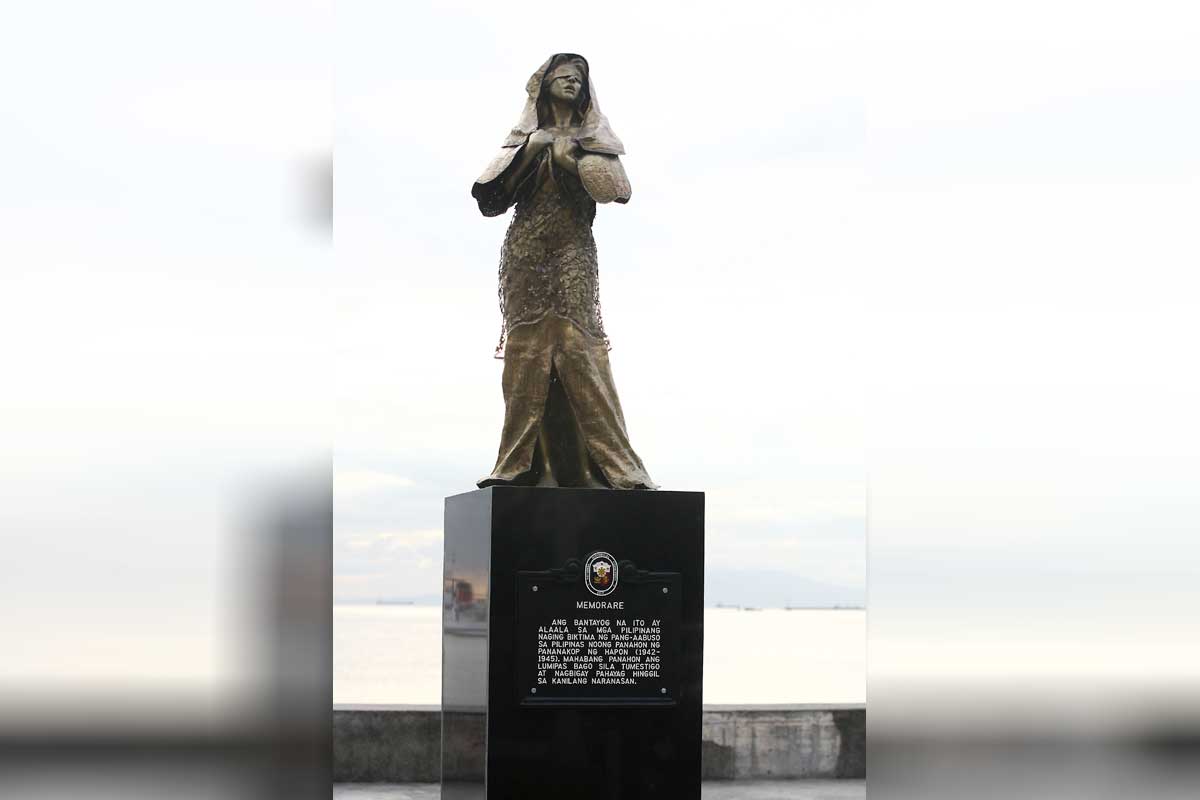 On Wednesday, the lolas decided to pose like the “Statue of a Girl of Peace,” an iconic artwork that stirred a global movement for sex slaves denied justice years after the Pacific War.

Dy sat in a chair beside an empty one, where framed photos of her fellow comfort women, lolas who have passed on, were placed.

After the statue was removed in 2018, then foreign affairs secretary Alan Peter Cayetano explained that the issue of comfort women had been settled and included in the 1956 agreement between the Philippines and Japan, in which Tokyo agreed to provide Manila $550 million in reparations.

But Cayetano also made it clear that the Philippines’ official position “does not stop any group or any individual, or Filipinos in general, from seeking any kind of settlement, justice, et cetera.”

“Our government is a lapdog of other more powerful countries,” said Sharon Cabusao-Silva, coordinator for Lila Filipina, a group fighting for comfort women’s right to compensation. “We should not forget our history.”

Dy is the last living comfort woman in Malabon, where she once lived with a group of comfort women who built their houses there using the Asian Women’s Fund, pooled from the Japanese people’s donations amounting to two million yen as “atonement money” for the war atrocities.

But for the surviving lolas, the compensation is not enough until Japan formally apologizes for their war crimes.

The Japanese government has pointed out that several of their prime ministers have issued public apologies for wartime atrocities at various occasions.

“The statues are being removed so that the Japanese government can revise its history for the new generation,” Dy told The Philippine STAR during a visit at her home in Barangay Longos last March.

Dy is aware that time is running out in her campaign to get justice, so she has passed on her fight to her daughter Lisa, whose late husband was a son of another comfort woman in Malabon, Lola Paula, whom Dy refers to as her “kumare.”

The younger ones call this their “pamana” or inheritance, to keep on fighting for their mothers.

“I was already 42 when she told us she had been raped,” Dy’s neighbor Consortia dela Cruz, 68, told The STAR about her late mother Gregoria Ibanez, who was raped by a Japanese soldier in front of her husband at their house in Biliran when she was in her 20s.

“At first, I could not believe that there could be a group for comfort women. When she died, I saw her will to fight for justice… That’s when I resolved to push myself to continue her fight,” Dela Cruz said.

The comfort women’s plight continues to serve as an inspiration for the youth, especially in today’s age of the feminist “Me Too” movement. At the Ateneo de Manila University, Art Management and Information Design student Celline Mercado was inspired by women like Dy and Maria Rosa Henson, the first comfort woman to come out in public, to invite artists and set up an exhibit honoring the Filipino comfort women’s ordeal.

“Through the exhibit, art becomes a viable medium for the lolas to find closure and healing, and at the same time to transfer memories transgenerationally, to educate people and to encourage students to respond creatively,” Mercado said.

One of the highlights of Mercado’s exhibit was the “Bahay na Pula,” a scale model by Kloii Ronquillo of the famous Red House in San Ildefonso, Bulacan where Japanese soldiers imprisoned their sex slaves.

The Malaya Lolas, also a group of Filipino comfort women, had visited the exhibit during its opening last March. Even if it reminded them of the horrors of being raped, it also became a symbol of their solidarity.

“Someone asked me if I am still hoping for justice. As long as we are alive, we will not run out of hope,” said Lita Vinuya, who was raped at the Red House when she was seven. 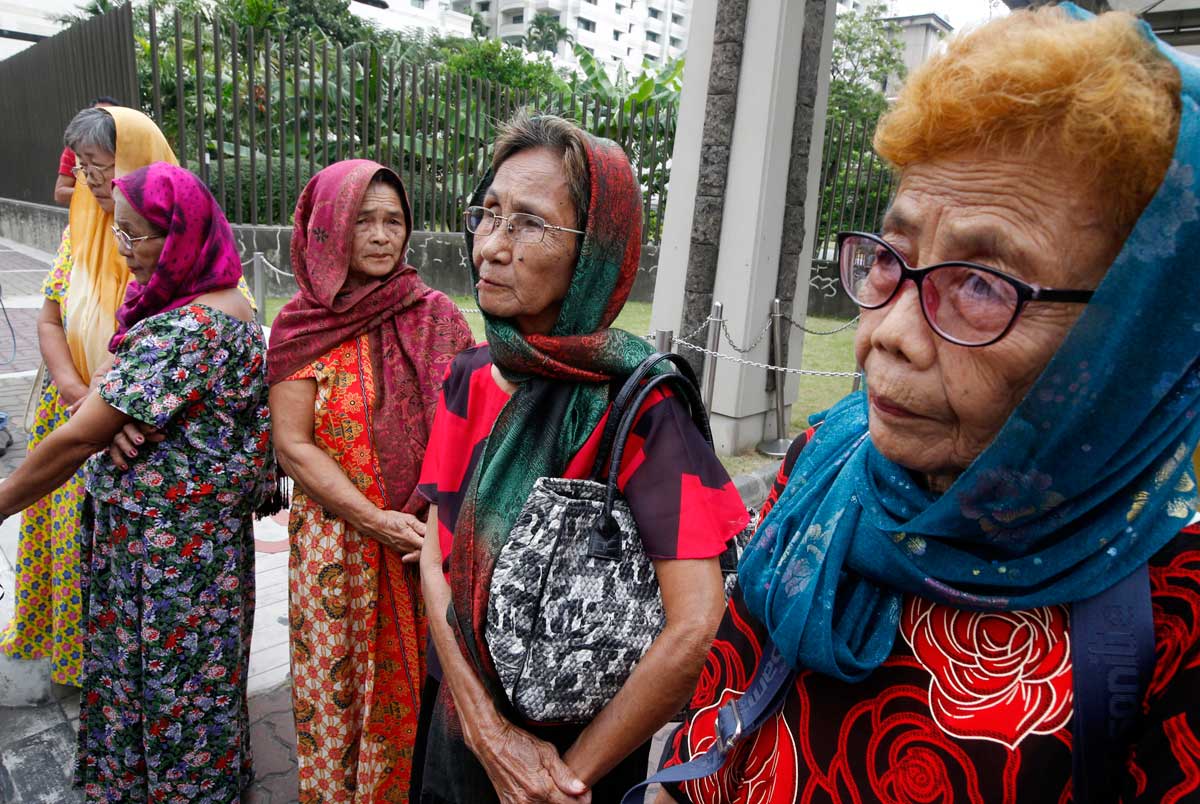 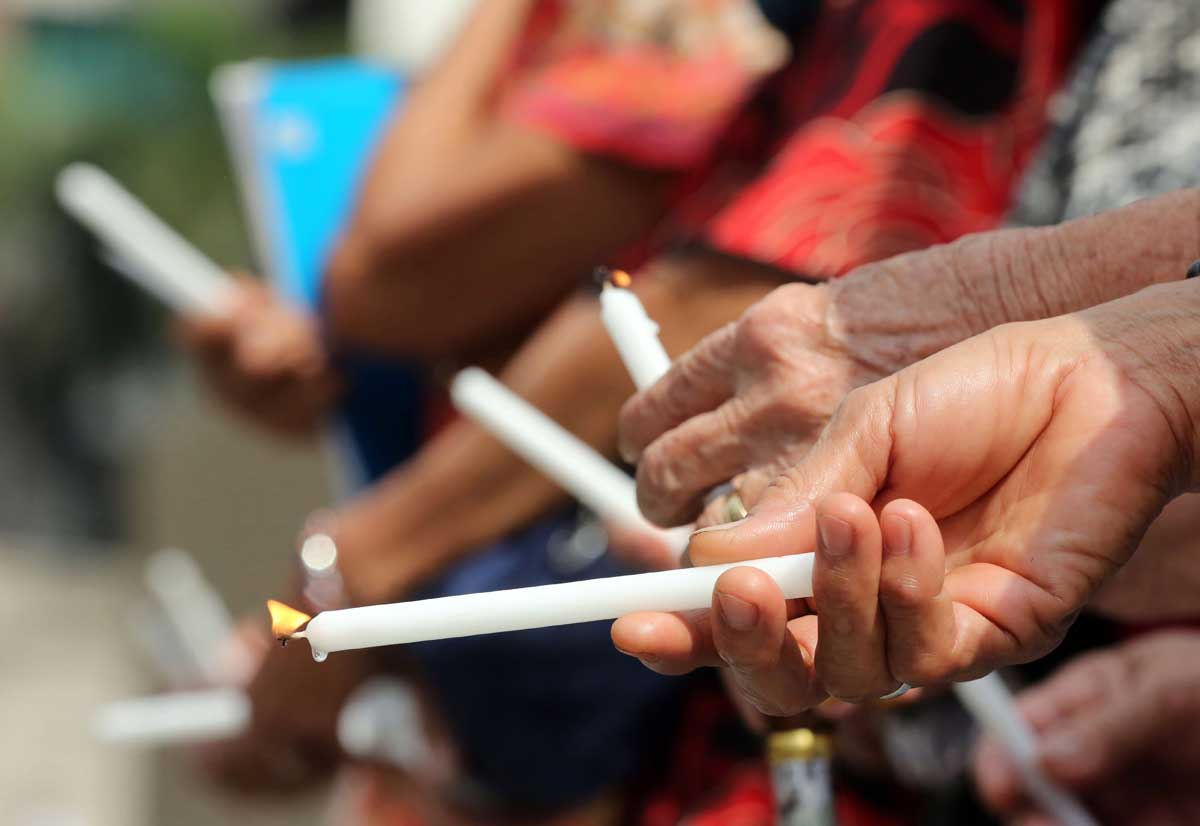 The bronze comfort woman statue along Baywalk was not the last to be removed for supposedly being erected without a permit and which offended Japan.

Last January, in San Pedro, Laguna, the statue of a girl, sitting in a chair with her hands on her lap and installed in a Catholic-run home for the elderly, was removed two days after its New Year unveiling, following the Japanese government’s expression of “disappointment.”

A third comfort women statue, installed at the jetty in Malay, Aklan that greets visitors to the world famous Boracay Island, is also in danger of being removed due to pressure from the government.

The owner of the statue, beauty queen-turned-activist Nelia Sancho, said the Department of Public Works and Highways (DPWH) had reached out to her to verify that the statue was not built in a public place, Lila Pilipina’s Silva said.

“Nelia texted me saying the DPWH is looking for the statue, and that if the statue was installed in a public place, it should be removed. What kind of government is this, that they’re the ones leading the denial of the rights of their citizens to understand and know history? Of course, it’s all in exchange for billions of pesos of Japanese loan and aid,” Silva said in a talk after the premiere last March of the Dulaang UP’s adaptation of the life of Maria Rosa Henson.

The life of Henson, who shared her experience as a comfort woman in 1992, was chronicled in the autobiography Slave of Destiny.

In Henson’s book, she lamented how it must have been her destiny to be a comfort woman, being an illegitimate child of a landlord who had raped her mother in their hometown in Pampanga. She was also part of the guerrilla movement against the Japanese during the war.

“I was 14 and had not yet begun to menstruate. I kept thinking, why did this happen to me? I remembered the landlord who had raped my mother. Did I inherit my mother’s fate?” wrote Henson, who had a miscarriage before she even began to menstruate when she was a comfort woman in Pampanga.

During Wednesday’s rally, among the framed photos beside Dy on the empty chair was that of Henson, who died in 1997 at age 69. Henson was there with Dy, even if only in spirit, during the demonstration.

Henson’s bravery had inspired lolas like Dy to take on the fight even in their twilight years and even if World War II had ended 74 years ago.