The government wants to keep the Philippines free from the new COVID-19 variant by banning foreign travelers from countries with such cases. But Hong Kong found a resident who traveled to Manila infected with the new strain. 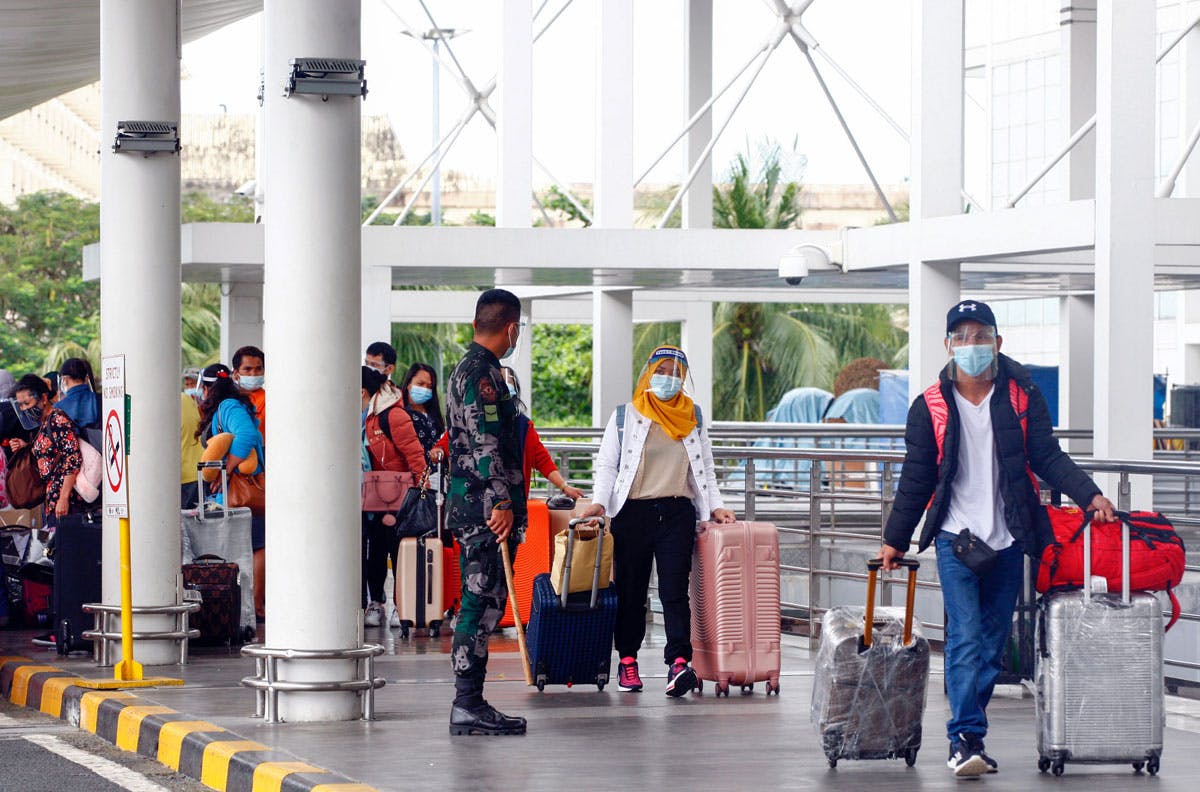 Overseas Filipino workers arrive at the Ninoy Aquino International Airport Terminal 2 in Pasay City for the trips to their respective provinces on Jan. 2, 2021 after completing the quarantine requirement to prevent the spread of coronavirus disease 2019. Photo by KJ Rosales, The Philippine STAR

Amid reports that Hong Kong had found the United Kingdom (UK) variant of the coronavirus in a traveler from the Philippines, a newly-created Technical Working Group of the Inter-Agency Task Force (IATF) for the Management of Emerging Infectious Diseases reported on Wednesday, Jan. 6, that the mutated strain has not been detected in the country.

Based on reports, the passenger from the Philippines was identified only as Case 9003, who arrived in Hong Kong from Manila on board Philippine Airlines (PAL) flight PR300 on Dec. 22. The person was found positive for the new strain of the virus on Monday, Jan. 4.

Chuang Shuk-kwan, head of the Communicable Disease Branch of Hong Kong’ Department of Health, was quoted by Asia Times as saying in a media briefing on Tuesday, Jan. 5, that that the mutated virus has spread “to many other countries since it was first discovered in the UK in September,” thus “it is within our expectation that some travelers coming from France and the Philippines were infected with the variant.”

According to PAL spokesperson Cielo Villaluna, the passenger presented a negative COVID-19 test before taking the Manila to Hong Kong flight.

“The presentation of a negative COVID-19 test by arriving passengers is a requirement of the (Hong Kong) government,” Villaluna said on Wednesday.

In a press briefing, TWG member and Philippine Genome Center (PGC) executive director Cynthia Saloma said the UK variant was not found in swab samples from 305 infected individuals after the conduct of genome sequencing.

Saloma noted the PGC also tried to look for the South African variant in 274 samples but found none.

“Among the 305 samples analyzed, we were able to assemble and assign lineages in 274 samples - none of which were classified to the lineage B.1.1.7 (UK variant),” she said.

The expert added the “most frequent mutations observed in the local samples analyzed are the D614G and S12F.”

She maintained that D614G remains to be the “dominant” strain causing coronavirus disease 2019 or COVID-19 across the world.

Since the COVID-19 pandemic started, the virus has mutated by over 12,000 times, according to Saloma. The most significant mutation was in June last year when scientists have detected D6146.

According to the United States’ Centers For Disease Control and Prevention or CDC, multiple COVID-19 variants are circulating globally.

In the UK,  the CDC said new variant has emerged with an unusually large number of mutations. “This variant seems to spread more easily and quickly than other variants. Currently, there is no evidence that it causes more severe illness or increased risk of death. This variant was first detected in September 2020 and is now highly prevalent in London and southeast England. It has since been detected in numerous countries around the world, including the United States and Canada,” the CDC posted on its website.

In South Africa, the CDC said “another variant has emerged independently of the variant detected in the UK.”

“This variant, originally detected in early October, shares some mutations with the variant detected in the UK. There have been cases caused by this variant outside of South Africa. This variant seems to spread more easily and quickly than other variants. Currently, there is no evidence that it causes more severe illness or increased risk of death,” the CDC noted.

“Another variant recently emerged in Nigeria. CDC also is monitoring this strain but, at this time, there is no evidence to indicate this variant is causing more severe illness or increased spread of COVID-19 in Nigeria,” the CDC said.

The TWG  was created in compliance with President Duterte’s directive to focus on monitoring and understanding the new COVID-19 variants.

The IATF approved Resolution No. 92 on Tuesday,  which created the TWG on COVID-19 Variants tasked  “to monitor and identify the occurrence” coronavirus variants in the country.

The TWG will also “provide policy recommendations to the IATF on the response against any variants of concern,” read the resolution signed by IATF chairpersons, Health Secretary Francisco Duque III and Secretary to the Cabinet Karlo Alexei Nograles. 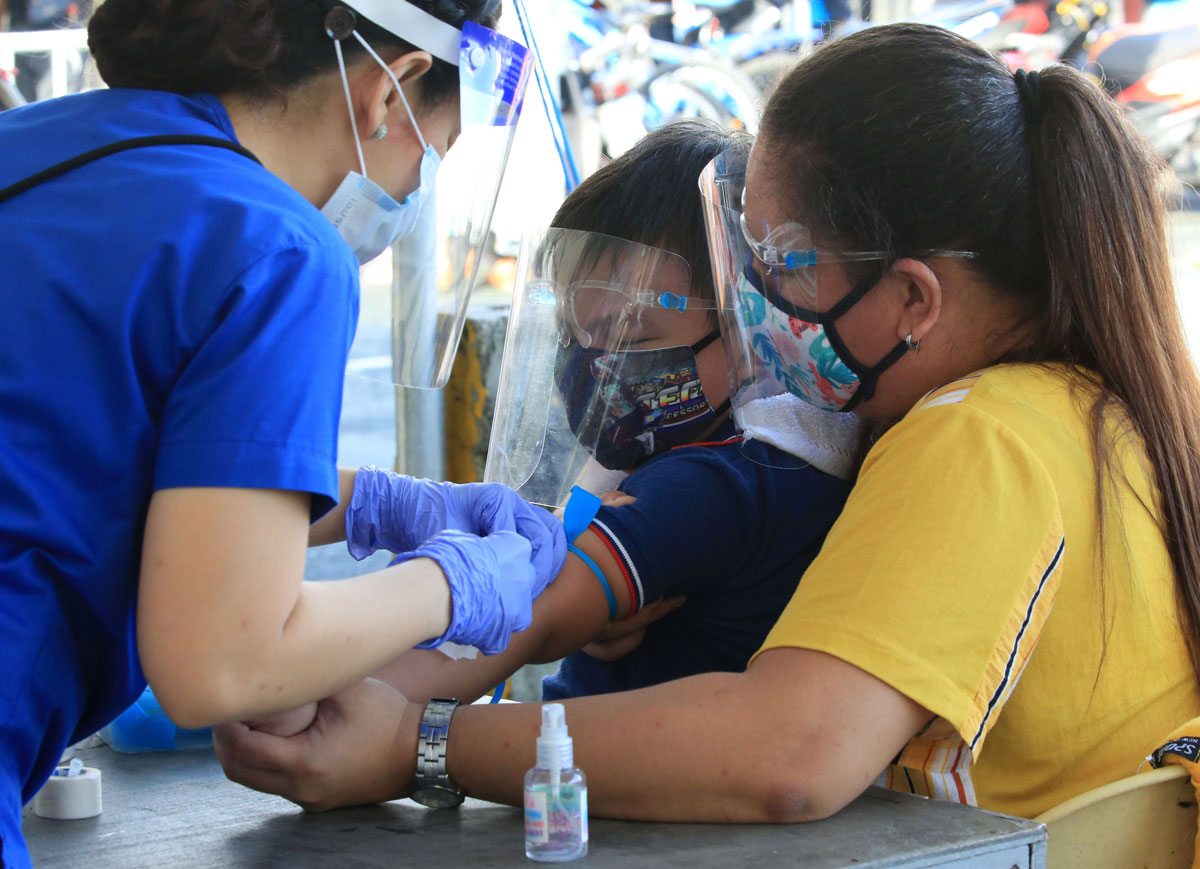 According to John Wong, founder of health research institute Epimetrics Inc. and member of the TWG,  “it was good” that the new variant has not been detected in the country because “it could buy us some time to prepare.”

“If the variants become the dominant species, meaning it becomes 100 percent of the species in the Philippines, our current reproduction (rate) of 1.1, (or the) 20,000 cases at the beginning of the month will be about 32,000 by the end of the month,” he said.

Wong added there are three things that must be done “if we want to avoid” this from happening.

These measures involve the reduction of the transmission rate of COVID-19 and duration of its infectiousness and observance of the health protocols.

Vergeire admitted they could not yet ascertain when and how the Hong Kong resident who traveled to the Philippines contracted the mutated strain, but contact tracing was already being done by the department.

“We have initiated coordination already with the International Health Regulations Focal Point of HK to request further details,” Vergeire said  in a pres briefing on Wednesday.

As of press time, the Department of Health (DOH) has not received a reply from Hong Kong, prompting the agency to coordinate with the World Health Organization office in the Philippines.

Vergeire disclosed the DOH was able to acquire the flight manifest of PAL PR300 flight to trace its passengers.

Vergeire said they want to get the details of the traveler, including where she stayed in the Philippines to expand the contact tracing.

While the report from Hong Kong is being looked into, the Philippine government expanded its travel ban to Portugal, India, Finland, Norway, Jordan, and Brazil to ensure that the new COVID-19 variants will not spread in the country.

The travel ban, which takes effect on Friday, Jan. 8, does not include Filipino travelers.

Presidential spokesman Harry Roque said the Office of the President came up with the decision upon the joint recommendation of the DOH and the Department of Foreign Affairs.

Vergeire explained the presence of the UK strain in these six countries has officially been confirmed in their respective official websites.

“Apart from the 21 countries that have already been announced, the DOH and the DFA have recommended the addition of six countries with official reports confirming the detection of this UK variant,” she told reporters.

“The list of countries included in the travel restrictions shall be regularly updated to include countries (that) will officially report detection of the variant,” the two agencies said in a joint statement.

They noted that travelers from countries not covered by the ban “shall be endorsed” to the local government units (LGUs) upon yielding negative real-time reverse transcription–polymerase chain reaction (RT-PCR) results.

“Despite negative results, LGUs are strongly urged to ensure that travelers complete their 14-day quarantine period either at a facility or at home,” they added.

Roque said foreign passengers “coming from or who have been to Portugal, India, Finland, Norway, Jordan, and Brazil within 14 days immediately preceding arrival in the Philippines, shall be prohibited from entering the country”  from Jan. 8 to Jan. 15.

On the other hand, effective immediately, Roque said foreign passengers coming from, or who have been to the six countries and jurisdictions within 14 days immediately preceding arrival in the Philippines, shall be allowed to enter the country if they arrive on Jan. 8, 12:01 a.m. Manila time.

The Philippine government ruled that the arriving passengers will be “required to undergo an absolute facility-based 14-day quarantine period, even if they obtain a negative RT-PCR test result.”

To accommodate Filipino citizens, the Palace official said those arriving after Jan. 8,  12:01 a.m. Manila time, shall be allowed to enter the Philippines.  However, they shall be required to undergo an absolute facility-based 14-day quarantine period, even if they obtain a negative RT-PCR test result.

Filipino and foreign passengers merely transiting through a country in the Philippines’ travel ban list “shall not be deemed as having come from or having been to that country, provided the passengers stayed in the airport the whole time and they were not cleared for entry by the immigration authorities of the said country covered by our travel restrictions,” as per the memorandum from Executive Secretary Salvador Medialdea dated Dec. 31, 2020.

Meanwhile, the Office of the President sad incoming unaccompanied minor Filipino passengers shall not be allowed entry from Jan. 8 until Jan. 15, except those returning through the repatriation program of the national government.

“These repatriated minors shall be turned over to the Overseas Workers Welfare Administration house parent who, in coordination with the Department of Social Welfare and Development (DSWD), shall ensure the minors’ safety and their observance of quarantine protocols,” the Palace said.

The move brings to 27 the total number of countries and territories that are subjected to travel restrictions by the Philippine government.

More than 30 countries have reported to have cases of the new COVID-19 variant.